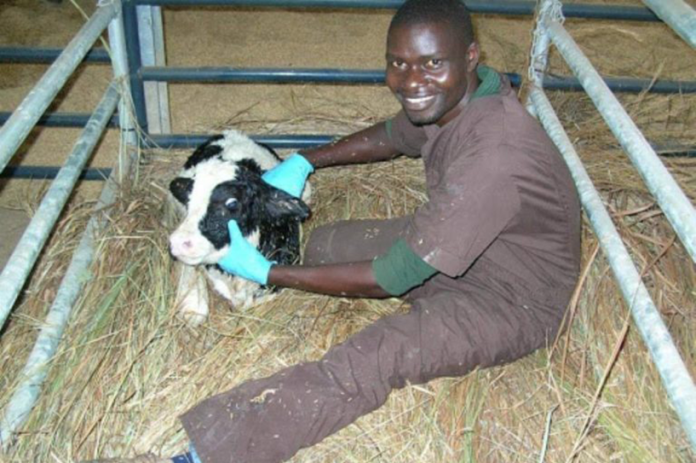 Dairy farmer Tonny Kidega is passionate about his cattle and his country’s health systems – and has been championing the importance of limiting the use of antibiotics to curb the development of drug-resistant “superbugs” and antimicrobial resistance (AMR).

Based in the Gulu district in northern Uganda, Kidega is a veterinarian and the Managing Director of the Gulu Uganda Country Dairy Limited.

He is also a firm supporter of Uganda’s new national action plan to eliminate the use of unnecessary antibiotics in livestock farming, which is the main driver of drug resistance – which could mean that common antibiotic medicines will no longer work on humans or animals.

“If I am reckless and I do not follow the procedures within my milk production value chain, and it gets antimicrobial residues, AMR will continue in the system,” said Kidega.

The Ugandan government is one of 10 countries in sub-Saharan Africa that is rolling out a national action plan to combat AMR, with support from the USAID-funded Medicines, Technologies and Pharmaceutical Services initiative.

The initiative, led by the US-based Management Sciences for Health, aims to help low-income countries to improve the prevention, detection and control of infectious agents; optimise the use of antimicrobial medicines; and generate knowledge, surveillance and research about AMR resistance.

“This is focused on the one health approach and under the same thematic areas of creating public awareness, training, and education; infection prevention and control; building antimicrobial stewardship as well as research and development,” says Reuben Kiggundu, who works with the Medicines, Technologies and Pharmaceutical Services (MTaPS) program.

“If we worked in these strategic areas and with a one health approach we would to some extent control AMR.”

The World Health Organization (WHO) has declared AMR one of the top 10 global public health threats facing humanity. It is estimated that by 2050, AMR will kill more people globally than all NCDs combined. A 2014 review on Antimicrobial Resistance: Tackling a crisis for the health and wealth of nations estimates that by 2050, 10 million people will die every year due to AMR unless a global response to the problem is mounted.

If no action is urgently taken, the cost of treatment for infections will be more than double, hospitalised patients will spend more days in wards, food security will be threatened and there will be more deaths, warned Dr Freddy Eric Kitutu, a lecturer at the School of Health Sciences and a leader of the Sustainable Pharmaceutical Systems Unit, Makerere University.

Importantly, the UN Sustainable Development Goals (SDGs) on ending hunger and availability of sustainable management of water and sanitation will not be achieved by 2030, said Kitutu.

As one of Uganda’s farmers who is participating in the new project, Kidega has adopted a series of best practices on his farm to reduce reckless use of antibiotics and other anti-microbial agents in his herds – beginning with the choice of that animals he that buys to the management of the farm and decisions about how products get to markets.

At his 40-acre farm, Kidega records his livestock’s journey and only buys cattle that are the right breed with traceable disease and treatment history and movement.

“The animal should be vaccinated, have a clear record from the diseases it was treated for and it should be the right breed,” he says.

He stays away from foreign breeds that have not been acclimatized to the local environment and sticks mostly to crossbreeds.

“There are many farmers who fall for buying foreign breeds that cannot withstand local diseases, and then these livestock often fall sick requiring treatment using antibiotics – which promotes AMR,” said Kidega.

The animals that he buys must have a movement permit that traces the journeys they have made and their host farm has to implement biosecurity practices, including disinfecting all the people who enter it. A fence for animal confinement as well as an isolation centre where sick animals are removed from the herd and treated are also a must.

“We have been advocating for people to sanitise before entry to the farm, and now with COVID-19, it is easier to enforce,” said Kidega, who hopes that farmers will continue to enforce these practices beyond the pandemic to prevent the infections that could spread to his herds – including from workers and visitors

While Uganda’s national plan is being rolled out by government authorities in the Ministry of Health and Agriculture, it also needs the support of consumers and industry.

Kiggundu explains that the “One Health” approach is essential because drug-resistant pathogens have the potential to cross between animals and humans, as well as spreading in local environments and beyond, across international borders – which makes AMR a global health security issue.

The MTaPS program in Uganda is thus a multi-sectoral initiative: “From this platform, we go out to the agricultural sector and the human sector and respond to some of their needs that contribute to their unique needs focusing on infection prevention and control and antimicrobial stewardship,” says Kiggundu.

Data Collection and Surveillance is Key to Addressing AMR

One of the ways in which governments can help to drive the change is through providing data which is done through research and surveillance, said Kiggundu. Already, medicines therapeutic committees have been set up in hospitals to provide data and ensure the correct use of antibiotics.

The Ministry of Agriculture, supported by MTaPS, has also published the essential medicine list for treatment – which shows the medicines that should be used to treat different animals as well as standard guides for treatment, importation, and procurement.

The guidelines on the use of antibiotics in the animal sector spells out drug use for poultry, pigs, fish, cattle, sheep and goats.

“Having such standards puts a foundation in place for surveillance, intervention and management,” says Kiggundu. “The idea is that you will improve biosafety and biosecurity on the farm, making sure you prevent infection in the first place. When you get infections, you are then able to use antibiotics appropriately.”

But there are still challenges, especially given that most of the agricultural service delivery is in the private sector while health delivery services are mostly in the public sector.

“We have a lot of data to show that antibiotics are no longer working very well. Resistance has been reported to all known antibiotics and in Uganda and the problem is perpetuated by a lot of misuse of antibiotics and poor infection and prevention control,” said Kiggundu.

“Given, the indiscriminate use of antimicrobial agents in livestock farming in this country, AMR attributable to the practice is most likely much bigger than we can imagine,” said Jackson K Mukonzo, a lecturer at the Department of Pharmacology and Therapeutics at Makerere University.

“As a country, we have not even been able to quantify or monitor AMR attributable to the use of antimicrobial agents in livestock even if there are scientific ways it can be done,” added Mukonzo.

But not knowing the extent of the problem does not make it go away. Uganda is now looking at creating awareness about AMR

“AMR is a very serious problem that we do not see until it happens. We need to create awareness. My action or inaction affects everybody – it affects us collectively,” says Kitutu.

Kidega said very few trained veterinarians know about AMR and this needs to change: “The people pushing for it are mostly international bodies,” he said. “I am trying to put into practice everything I know about the prevention of AMR. The advantages outweigh the effort and everyone should play a part.”