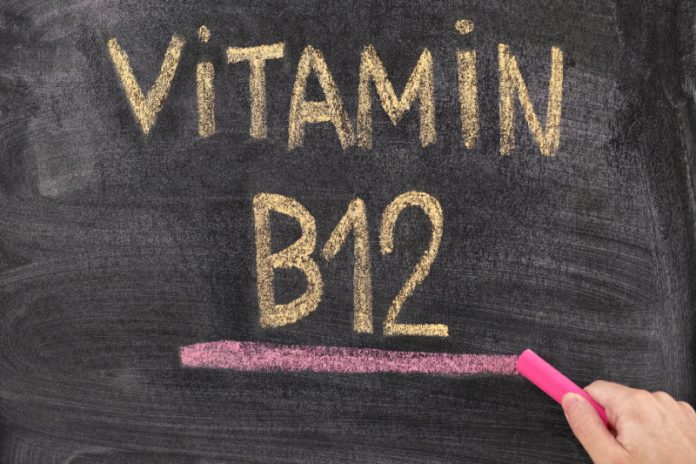 Comparison of the quality and amount of Vitamin B12 in animal versus plant-based foods and whether the gut produces this nutrient in usable form.

Modern dietary propaganda consistently gets it wrong…very VERY wrong…when it comes to the critical nutrient Vitamin B12.

The false notions pertaining to proper food sources of B12 have resulted in epidemic numbers of people being deficient in this all-important nutrient. The health consequences of this can be nothing short of devastating over the long term.

Deficiency of B12 is extremely dangerous to health and can lead to dementia and even death if not rectified.

Early symptoms include paleness and overall weakness and fatigue. As the anemia caused by B12 deficiency progresses, symptoms can mimic aging.

Thus, some physicians can easily dismiss these signs as a somehow natural or “normal” occurrence.

Easy bruising is one of the most visible signs. Personality disorders and anger issues can also sometimes manifest.

For those trying to lose weight and using fascia blasting devices to help reduce the appearance of fat, severe bruising can occur.

Nervous system, reproductive, and digestive problems such as depression, tingling hands/feet, stomach upset, constipation (or diarrhea),  and difficulties getting pregnant are also warning signs of low B12 status.

Children with B12 deficiency are particularly at risk with permanent damage to development a very real possibility. Growth retardation, delay in motor skill development, and significantly reduced problem-solving, spatial ability, and overall ability to learn are the consequences of low B12 in the developing years.

The real culprit in the B12 deficiency epidemic (by some estimates, about 40% of people are deficient and most are completely unaware of the situation), is the demonization and consequent avoidance of B12 rich foods by a duped public.

B12 High in Animal Foods

The very foods highest in B12, particularly pastured organ meats and fresh eggs, are the very same ones erroneously labeled as unhealthy by conventional nutritional circles. These include:

Ironically, these very same foods were revered by Traditional Societies. The reason is that they imparted vibrant health, vitality, fertility, and healthy babies and children to those that consumed them:

Do Gut Bacteria Produce B12?

Because the original source of B12 in nature is bacteria, some nutritional sources confuse the issue by maintaining that beneficial B12 is synthesized by gut flora in the colon of humans.

While this may be true, the B12 that is produced this way is not in a usable form. The body is able to absorb very little if any bacteria-produced B12 across the walls of the large intestine or colon.

The reason is that the bacteria produced B12 in the gut is not attached to the “intrinsic factor” (IF). This is a special protein that is secreted in the stomach.

B12 must attach to an intrinsic factor protein to be absorbed effectively. This happens when B12 binds with the intrinsic factor that has been broken down by pancreatic enzymes in the small intestine.

The tightly bound B12-intrinsic factor complex then moves through the gut to the Ileum or lower portion of the small intestine. From there, it attaches to cell receptors for absorption.

B12 in Plant Foods

Contrary to claims by the vegan community, usable B12 is not available in algae like clean sources of spirulina or tempeh (a fermented soy product).

The B12 found in these foods is similar to true B12 but not exactly the same thing. The B12 in brewer’s yeast also called nutritional yeast, is due to factory fortification. In other words, it is a synthetic source and not naturally occurring.

Studies have indicated that these B12 analogs in algae and tempeh are not bioavailable. Blood levels of the nutrient did not change even after these plant-based foods were added to the diet.

Even worse, these B12 imposters can actually inhibit the absorption of true vitamin B12 as the result of a competitive situation in the digestive system. This puts those that avoid animal foods at an even greater risk for deficiency!

Hindu Vegans without B12 Deficiency

Proponents of the B12 in plant foods myth like to point out that Hindus from India do not seem to suffer from any B12 deficiency despite a diet that includes no animal foods.

However, the discussion conveniently omits that vegan Hindus that move to England quickly develop B12 deficiency symptoms. This is the case even if they continue to follow their Indian diet.

This is because, in India, the plant foods consumed by vegans include many insects and insect larvae via unprocessed grains.

In England, insects and their residues are completely removed from plant foods before they are consumed. This occurs due to more modern processing methods. This removes the tiny and yet plentiful animal foods serving to preserve the Hindu vegans’ health in their traditional homeland.

Can B12 Supplements Fill the Gap?

It is always best to seek critical nutrients like B12 from food. However, if absorption is not optimal due to digestive issues or restrictive food philosophy, supplementation can become necessary.

The best whole food supplement for B12 is desiccated liver tested to be glyphosate free.

For extremely low B12 status, this is an excellent brand to raise levels rapidly.

The pathways for the uptake of this critical nutrient are very complicated. In addition, common physical issues such as reduced stomach acid, compromised protein digestion, lack of pancreatic enzymes, and autoimmune disorders can cause disruption in the absorption process.

Preventatively, the best approach is plentiful servings of foods rich in B12. This liver and bacon pate recipe is a delicious way to get this sometimes difficult food into your family. This single dietary tweak can easily avoid this common nutrient deficiency by maintaining optimal levels for maximum vitality.

(1) Myths of Vegetarianism
(2) Vegetarian Myths
(3) Vitamin B12 Food Sources
(4) Vitamin B12 from Algae Appears Not to be Bioavailable
(5) Vitamin B12: Plant Sources, Requirements, and Assay
(6) B12 Deficiency

Source
Vitamin B12 in Animal versus Plant Foods is written by Sarah Pope for www.thehealthyhomeeconomist.com